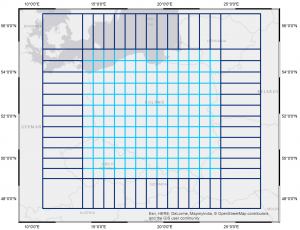 TOMO2 is a local tropospheric tomography model based on satellite observations and meteorological parameters. Its main goal is to estimate spatio-temporal distribution of the water vapor in troposphere, which is one of the most important factors forming weather conditions. The possible application for the model results might be assimilation in Numerical Weather Prediction (NWP) models.

TOMO2 solution is based on the GNSS tomography principles. Slant GNSS observations between satellites and receivers are used to estimate, through an inversion process, water vapor content for a three-dimensional gridded domain. The model takes advantage of Slant Wet Delays (SWD) or Slant Integrated Water Vapor (SIWV) calculated from: GNSS observations of Zenith Total Delay (ZTD), meteorological parameters and mapping functions. There are two possible outputs of the TOMO2 solution – a field of wet refractivity (based on SWD) or water vapor density (based on SIWV).

The model domain can be flexibly set by defining its spatial extent and numbers of voxels in north and east directions. Vertical levels are also defined by user – so they can be irregularly spaced, what is desirable because of the large variability of the water vapor in lower parts of troposphere. Another options defined by users are: usage of additional a priori data, horizontal or vertical constraints, epoch stacking. The characteristic of TOMO2 model is application of Kalman filter (standard or robust) instead of ordinary least squares. Verification of the solution is based on observations from the Universal Rawinsonde Observation (RAOB) stations. The software can be used in post-processing or near-real time mode.

Software can be downloaded and used free of charge upon signing a license agreement, please contact witold.rohm@upwr.edu.pl or estera.trzcina@igig.up.wroc.pl

Accuracy of GNSS tomography as compared to radiosonde profiles.

More details about the model can be found in the following papers: