The International Laser Ranging Service (ILRS, Pearlman et al. 2002) stations are able to provide range measurements to GNSS satellites as long as satellites are equipped with laser retroreflector arrays (LRAs). Optical SLR observations are independent from microwave GNSS measurements, thus, the satellite laser ranging can be used as a validation tool for GNSS-derived orbits. Only two out of all GPS satellites were equipped with LRAs, as a NAVSTAR-SLR experiment. Satellites were tracked by ILRS between 1994 and 2014 until they were decommissioned. There are plans that all new GPS-III satellites will carry retroreflectors. As opposed to the GPS system all satellites from new GNSS systems, i.e., GLONASS, Galileo, BeiDou, QZSS, and NavIC are equipped with LRAs.

As an independent technique from microwave observations, Satellite Laser Ranging can serve as a validation tool for GNSS orbits and allow for the orbit accuracy assessment. The RMS of residuals at the level of 24.0 and 32.7 mm for GPS and GLONASS, respectively, (Sośnica et al. 2015) coincide with the accuracy of orbits assessment provided by International GNSS Service (IGS, Dow et al. 2009). SLR tracking to GNSS is also used for the assessment of the new empirical orbit models (e.g., ECOM, Arnold et al. 2015), its influence on daytime/nighttime observations, and the consistency between both microwave and optical techniques.

Further analysis of SLR residuals to Galileo orbits confirm the correctness of the new ECOM model and also discovered that it can be used for the determination of elliptic orbits (Sośnica et al. 2016). These analysis reveale that two Galileo satellites launched into extended orbits are fully operative and can provide a correct data. 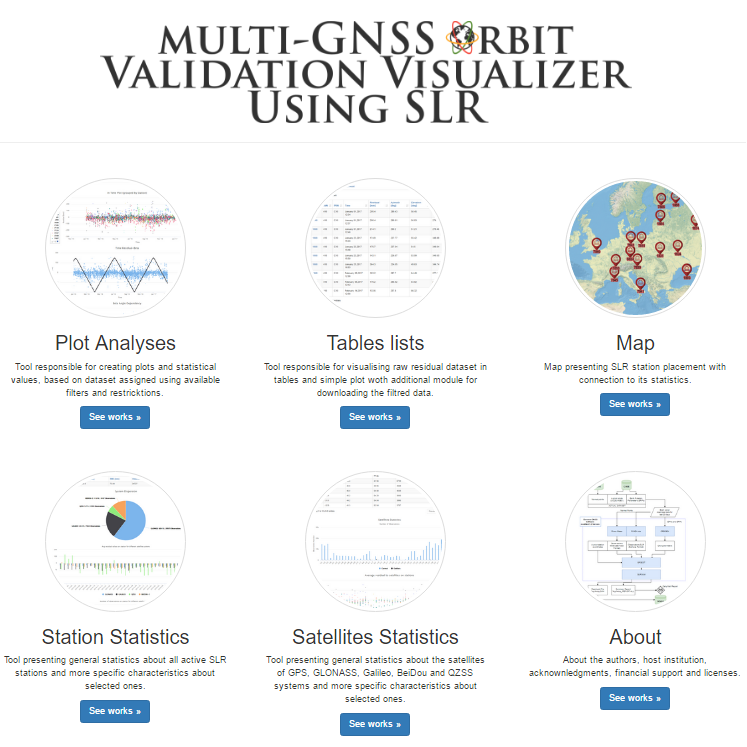 Multi-GNSS Orbit Validation Visualizer is a web service that provides a graphic and numeric representation of SLR residuals to GNSS satellites. The user can plot SLR residuals to either specific spacecraft, or whole constellation of chosen navigation system as a function of satellite position w.r.t. the Earth or the Sun. Fig. 1 and Fig. 2 presents an exemplary plot of SLR residuals for Galileo-IOV satellites.

The service enables station residuals to be present depending on the station components, i.e., laser or detector type, and station geography, i.e., location on a tectonic plate or its affiliation. The aforementioned SLR station information can be presented in tabular form as it is shown in figure 3.

Since Satellite Laser Ranging provides precise distance measurements to satellites, it is thus possible to determine an orbit of any satellite equipped with laser retroreflectors. All new GNSS satellites are scheduled for tracking by the ILRS. The number of SLR observation to navigation satellites is growing in a dynamical way, thus, SLR can serve not only as a validation tool but also for the estimation of navigation satellite orbits.

The consistency of orbit solution using microwave and SLR data can be evaluated by the comparison satellite position decomposed into three directions i.e., R – radial – pointing from the center of the Earth to the satellite, S – along-track – tangential to the vector of satellite velocity, and W – cross-track – normal to the satellite plane. Figure 4 shows the comparison of microwave and SLR orbit of GLONASS R18 satellite for two days of 2015.  The quality of SLR solution depends on the number of SLR observation. For less than 20 observations (right) it is not possible to determine a reliable GNSS orbit, thus, we cannot evaluate the consistency of SLR and GNSS orbit solutions.

Table 1 shows results of the comparison between microwave CODE and optical SLR-derived orbits of Galileo, BeiDou and QZSS satellites obtained for selected days with a large number of SLR observations to navigation satellites. The differences are decomposed into three directions: radial – pointing from the center of the Earth to the satellite, along-track – parallel to the velocity vector of the satellite, cross-track – normal to the orbital plane. Due to the fact that the radial component is directly observed by SLR, the orbit in the radial direction is characterized by the superior quality. The orbit differences strongly depend on the total number of SLR observations. The more registered SLR observations to GNSS satellites, the lower the orbit differences.

The plans for the nearest future include a further analysis of differences between microwave and optical orbits for a longer time series. The internal accuracy of the optical orbits is going to be checked as well, by analyzing the formal errors of selected Keplerian and ECOM parameters determined using SLR data. The final results are supposed to reveal systematic errors in both space techniques and their correlation. The goal of this analysis is to minimize the influence of systematics and to perform a consistent combined solution of GNSS and SLR techniques.