The ray-tracing algorithm we apply for ground-based GNSS applications allows to track the microwave signal on its way from a receiver to a satellite in order to determine tropospheric delays. We use Weather Research and Forecasting (WRF) model as a meteorological background to construct refractivity field and associated propagation trajectory. WRF forecasts limited to the territory of Poland and neighboring countries are provided in 1-hour temporal resolution in 4×4 km horizontal grid and meteorological variables on 48 staggered vertical layers up to approximately 20 geopotential kilometers. In order to determine precise tropospheric delays, supplementary data are acquired from U. S. Standard Atmosphere 1976 above WRF’s upper limit up to 86 km.

The raytracer uses bent 2-d model that assumes the ray-path to be a curved line within the plane defined by a ground receiver and a satellite with respect to Earth’s center. We ignore the perpendicular contribution to the ray-path, hence horizontal gradients have no effect on computed delays. The ray-path refraction follows Snell’s law in geometric optics approximation using WGS84 as a reference coordinate system. The algorithm has a capability to compute zenith and slant delays for both, hydrostatic and non-hydrostatic components together with associated mapping functions, bending angle and geometric bending effect. 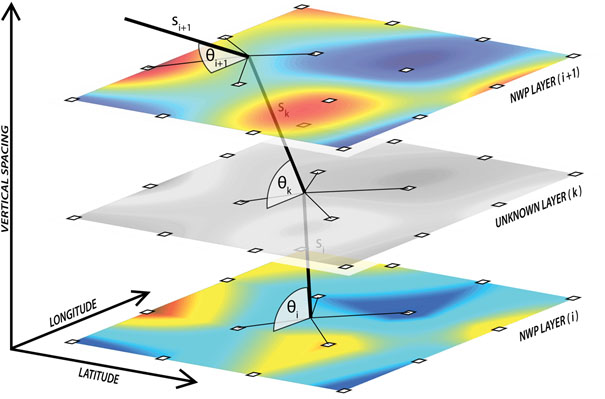