The availability of precise GNSS products in real-time opened new possibilities for GNSS meteorology. A lot of efforts have already been made to optimize real-time GNSS ZWD estimation strategy. Dousa et al. (2013) reported standard deviation of ZTDs below 10 mm, with existing systematic errors of few centimeters, attributed mainly to the incomplete observation model in the software. Ahmed et. al (2016) noticed a significant decrease of the accuracy when ignoring antenna reference point eccentricity, phase center offset and variation. They also noted ZTD errors up to 4 mm when higher-order terms of ionospheric delay were neglected. On the other hand, the improvement of ZTD estimation from integer ambiguity fixing was at the millimeter level only. Li et al. (2015) reported a significant improvement in ZTD accuracy of about several millimeters when processing multi-GNSS data, rather than 10-20 mm using single system data. Ning (2012) noticed that the effect of the mapping function reduces with increasing elevation cut-off angle.

Our contribution to Real-Time troposphere monitoring strategy optimization is related with ZWD stochastic modeling. We have shown that the optimum ZWD constraints in real-time GNSS processing, modelled as a random-walk process, should be time and location specific. This means that a single random walk processing noise (RWPN) value should not be applied globally to all stations, because it may lead to significant degradation of solution quality. Moreover, we have shown a potential of regular ray-tracing through a shortest available forecast from a regional numerical weather models for adjusting the random walk processing noise to the current troposphere conditions. 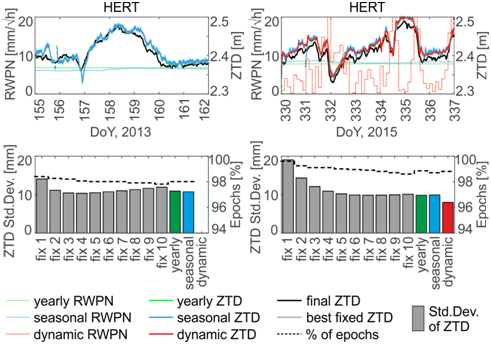 We are also developing real-time troposphere monitoring service for Poland, following the the strategy of the real-time demonstration campaign of COST ES1206 Action (): receiver coordinates were estimated as static parameters, the IGS03 stream from IGS RTS was used and the parameter sampling rate was 30 seconds , tropospheric gradients were not estimated. We estimate ambiguities as float static values, reinitializing the ambiguity on occurrence of cycle slips. The receiver clock is estimated as white noise, the elevation cut-off angle is set to 5 degrees, and we apply the inverse of the sine of satellite zenith angle for observation weighting. We remove the hydrostatic delay with VMF-1 derived ZHD and hydrostatic mapping function, while ZWD is estimated as a random walk parameter using VMF-1 wet mapping functions. Finally, we reconstruct ZTD as the sum of ZHD and ZWD at every epoch. We are also developing a ZTDVis tool to visualize results and compare them our near real-time solution, as well as with final estimates provided by some other analysis centers. The most up-to-date version can be found here: http://156.17.181.17/ZTDVis/map_charts3.html